We’ve all heard it before: don’t judge a book by its cover. Do people really listen to that? No, at least not in the literal sense. The message behind it is obvious. Don’t base your opinions of people based on how they look. That’s great advice that I totally agree with. I think some people follow that guidance and others don’t, but that’s not at all what I’m talking about.

I’m talking about books. Real books. In particular, let’s talk about MY book. Stripped was released last year and I couldn’t have been prouder. I’d put more than two solid years into writing, editing, rewriting, editing, rewriting, soliciting feedback, reworking, editing…well, you get the picture. It was accepted for publication at Post Mortem Press and released in August 2012. I loved the cover, as I felt it captured a very key element to the book. However, after a year of honest comments and opinions I realize it didn’t capture the overall feel of the book. Not even close.

The book is not about dancing. Despite the title, the book is not even about stripping. The book is about horrible violence and revenge. It’s is about a woman who is brought to such a low point that there really is no way to go but up or dead. Sure, at one point she dances at a strip club…because she’s forced to. None of that was captured in the cover.

A few people who’d read the book commented that the cover didn’t really work for them. I’ve even heard that in reviews like this one that started with “I put off reading Stripped entirely due to its cover…”. Thankfully it turned out to be a great review, and I am truly grateful that he decided to read it after all.

On the flip side, I’ve heard from a number of people who absolutely loved the cover. I never put too much thought into it until I did an event this past summer that really made me think. I was at the Middletown Open Air Market, and Stripped was sitting on one of the racks among the other books. As a woman started perusing the titles, I asked what kind of books she was interested in. She mentioned a few things she liked and I started pointing out similar titles (of which I honestly thought Stripped would be a good fit). As I presented each book, she picked it up and glanced at the front and back covers (you didn’t think I’d book block the other authors, did you?). When she gets to Stripped, I start to tell her what it’s about. She looks at the cover without picking it up, holds up her hand, and says “I’m sorry, I don’t read smut…do you have any mysteries?”

Well, crap. How many times has this happened without anything being said? On the flip side, how many people picked up a copy of Stripped and were disappointed when it was dripping with blood and violence instead of sex? What to do? 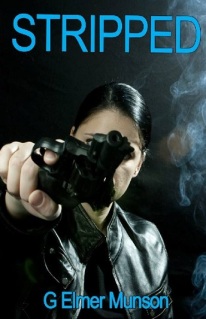 On this fine rainy Halloween, it’s with great pleasure that I share with you the new Stripped cover, just in time for Anthocon next weekend in Portsmouth, New Hampshire. The good folks from Post Mortem Press will be there once again, as will I. While I’m at it, I’d like to give special thanks to Eric at PMP for…well, for being Eric. If you know him, you know that’s a compliment.

The new cover is also live on Amazon for Kindle and paperback and Barnes and Noble for Nook. If you’ve been turned off by the original cover, maybe you’ll pick this one up and flip to the back. After all, we do judge a book by its cover, and if we like it enough we tend to flip to the back. That’s where you’ll learn what the story is really about. That’s where you’ll learn if it’s your kind of book.

Happy Halloween, friends of the internet. Here’s to many more….

1 thought on “Judge a book by its cover?”